This cross-post from Alex DeBonis originally appeared at Bitch Flicks as part of their Halloween-themed “Horror Week 2011”.

Viewers might hope that with its unconventional approach, shoestring budget, and status as the first blockbuster powered by Internet buzz, The Blair Witch Project could offer horror fans something they haven’t seen before, specifically in terms of how women are represented. At first, the flick looks promising because it centers on a female lead in a position of authority. While it’s arguable whether The Blair Witch Project’s through-the-viewfinder conceit is actually innovative (cinephiles like to point to the correlations between Blair Witch and Man Bites Dog and Cannibal Holocaust), it’s safe to say that—in 1999, at least—no films with this particular conceit had enjoyed such widespread popularity. The presence of this conceit might account for the film’s success, coming as it did in the watershed era of reality television. Its lo-fi, DYI qualities lend the film a realism that at that time felt new and potentially persuasive. While the ensuing years have brought us further variations on the motif—Cloverfield, Paranormal Activity, and Super 8, among others—it’s also become much easier to see how The Blair Witch Project, for all its putative realism, renders unduly harsh judgments on its female lead.

In case you haven’t seen it, the film is supposedly “found” footage, recovered long after the three filmmakers depicted in the footage disappeared in the Maryland woods. There is little metaphorical space between the framing device (specifically, a shaky title card explaining when the footage was found) and the film-within-a-film. The film-within-the-film is the movie, it is the whole story. We are invited to view the footage as the unvarnished artifacts, the evidence of all that remains of Heather Donahue’s film project. Yet, the footage is edited for pace, laughs, and content with scenes that alternate from video to Hi 8 repeatedly.

Directors Daniel Myrick and Eduardo Sanchez attempt to cover their editorial tracks by purposefully leaving in moments showing equipment checks and goofing around. Ideally, this approach would sustain the realism while allowing the filmmakers to craft a watchable film. Problem is, the edits also clearly posit Heather as the one responsible for what happens to herself and her crew. Heather is not blameless, yet for all her blunders, she is no more responsible for the bad turn of events than either of her male cohorts. But the film itself, and possibly its two male directors, want to lay the lion’s share of the blame at her booted feet. Her treatment both in the film and by the film belies a grave discomfort with a woman in charge. (This same discomfort might explain why Heather is pictured without a mouth on the DVD packaging, seen at the top of the post.)

Ostensibly, actress Heather Donahue’s portrayal of student filmmaker Heather Donahue seems positive. She’s no scream queen, scampering topless into the underbrush with breasts a-bob. This character is a product of her time: a self-possessed, driven, and adventurous young woman of the Lilith-Fair generation. The film opens on her, videotaping her preparations for what she knows will be a challenging shoot.

Audiences see volumes on local history and wilderness survival among her possessions, and we see her forthrightness when it comes to dealing with the two male members of the crew. She drinks with the guys, and even chokes down some scotch. In the wilderness she casually dismisses both the risk of sexual violence and the appearance of impropriety by joking about her having two men in her tent. In directing Josh and Mike, she is self-assured. Her stern directive to them before they begin filming in earnest is that she “wants to avoid being cheesy” in the documentary. Similarly, in the early scenes, she comes off way more professional than the male crew members. 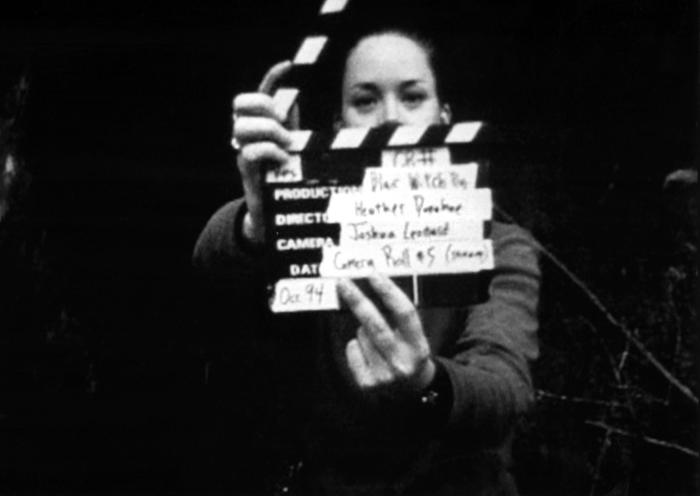 Her initiative stands in stark contrast with the lackadaisical insouciance of Josh and immature foolishness of Mike. When Josh arrives at her apartment, she dubs him “Mr. Punctuality.” After the three record an interview with a local eccentric, Josh complains (rightly) that the focus was off and blames it on the camera’s having only metric designations. When Heather observes that the lens also has U.S. measurements in brown letters, Josh only mumbles that the white numbers are more obvious. Then Heather states that she thought he used this camera before, and Josh is forced to acknowledge that he’s only used it once before. This moment may seem incidental, but it suggests that Josh may be out of his depth (or at least as out of his depth as Heather). Compared to Mike Williams, though, Josh is an old hand at the movie-making game. It’s made clear at several points that this is Mike’s first filmmaking experience. Mike is shown to be easily rattled and prone to angry confrontations. In particular, his rage over the first time the three become lost is especially irksome because, despite acknowledging that he has no ability to understand a map, he claims that he doesn’t “fully trust” Heather to get them out of the woods. The two males are quick to blame Heather for their situation because they are ultimately uncomfortable with her leadership.

Despite Heather’s capability, the film allows the two male characters to use the cameras to subtly undercut her authority. Josh directs the camera at a clearly agitated Heather as she struggles to find a hidden spot to urinate. He says, “What’s that? Is that the Blair Witch? No, it’s Heather, taking a piss.” When she expresses displeasure at being filmed, he shouts “Just go already!” While it may seem that Heather takes the same sort of liberties with the camera herself, particularly when she films Mike shirtless and makes fun of his “sporadic” chest hair, it’s worth noting that he fires back at the taunting with “You should see my ass.” Heather doesn’t take him up on the offer. Yet later, when Mike himself is holding the camera, he centers it on Heather’s muddy backside and cries, “I see a dirty behind!” Even in the woods it seems that men are still afforded a degree of privacy denied to the female character. While Heather is shown bursting into tears at three or four points in the film, Mike bars her from taping Josh as he sobs under a tree, keeping her at a distance.

It’s not just her cohorts that denigrate Heather; it’s the film itself. The directors include several confrontations that show Josh blaming Heather for their plight, criticizing her enthusiasm and drive. At these points, the film becomes self-conscious in a way that suggests the “hands of the directors” at work, rather than the loose improvisational feel of other scenes. The repeated taunting by Josh shows that he feels she is largely responsible for their situation.At one point, he asks, “You gonna write us a happy ending, Heather?” as if she has scripted all this out.

But the film itself denigrates Heather because she accepts responsibility, almost agreeing with the taunts. The most famous scene in The Blair Witch Project is Heather’s tearful confession into the lens. The substance of this confession is that she is responsible for what’s happening to them, but it’s infuriating that Heather takes responsibility and does so at this point.

The confession scene tries to make Heather an Ahab-like figure. On the one hand, her tendency to tape allows the narrative conceit of the film to operate. When events take a turn for the eerie and tense, Heather’s obsession with documenting the experience keeps the cameras rolling and allows us to see the ensuing tumult. On the other hand, it puts her energetic striving for a quality film on trial and coaxes from her a confession for a crime she doesn’t actually commit.

First of all, unless Heather herself is also somehow the Blair Witch, she is not responsible for what’s happened to them. If the witch has caused disruptions in the compass, or somehow made the woods alter its appearance, or through black magic made the woods grow, then this could hardly be the fault of the student filmmaker who stumbled into this situation. What’s more, if we believe that the Blair Witch is responsible (rather than sadistic locals), then what motivation does the witch have for tormenting and disappearing three college students? It seems significant that the nocturnal sounds begin in the dead of night after Josh accidentaly disturbs one of the rock piles while filming in the cemetery. This gaffe horrifies Heather, who gently replaces the rock and plants a kiss on it, saying “You can’t be too careful.” Heather also didn’t kick the map (possibly their only salvation) into the river; Mike did that.

Heather’s foibles are no more or less destructive than those of her peers. She’s inexperienced and becomes subject to the hunger and fatigue of the situation. So do her male counterparts. She exhibits poor decision making (not telling Mike about Josh’s severed finger), but it’s no worse than Mike’s decision to kick the map into the creek because he was angry. Yet her confession doesn’t have the feel of a woman taking responsibility for something she shouldn’t. Instead, the scene seems like the despairing of someone who has irrevocably screwed herself. The film wants us to agree that it’s her fault, hers alone.

Alex DeBonis has a PhD in fiction writing and literature from the University of Cincinnati. He currently teaches fiction writing, literature, and journalism in rural West Tennessee. His work has appeared in WordRiot, FictionDaily, eclectic flash, Storyglossia, no touching, and is in the current issue of kill author. He lives with his wife and son in Paris, TN.